I'm not a lecherous old man, and Al's not a preacher, but we play 'em in "Palliate."

I’m sure you would agree that I’m a really nice guy. I can see many of you nodding in 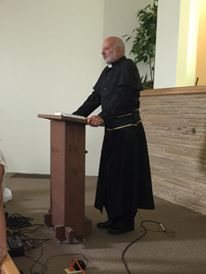 agreement at this very moment. “Nice” is the third best image to project. “Nice and buff” is the best.

Acting nice has come easy for me, because I’ve had such a sheltered life. When I was growing up, Mom dragged us to church twice on Sundays and once every Wednesday night. Yes, that caused me to miss the most epic TV programming ever, but it did make me to appear nice.

The Hayter kids were raised by a hard-working dad and a mother who stayed home caring for us. Part of the “caring” involved a lot of yelling and spanking. If we had been the only neighborhood kids who got spanked, we would’ve turned out so less nice.

At no time did I consider smoking, drinking, carousing or cussing. I think I frolicked once. I might’ve done that. Regardless, I was such a clean-cut person that while working my way through college at a factory, I was teased for being so square… so innocent. It was my first encounter with “raunchy” adults.

I absolutely hated the job. The only thing that made it bearable was the camaraderie with those raunchy men. Their teasing was good-natured, their work ethic admirable, and their thoughtfulness genuine. I didn’t pick up any of their bad language, but I did laugh at some of their crude jokes. There are some jokes, the humor of which, supersede all bounds of propriety. I’m not sure what that means, but it just might justify my reaction to the bawdy jokes.

The work experience left me a tad less naive. I did maintain my niceness, though. That’s very important. In fact, I can think of only two areas where being nice is not helpful. That is in writing and acting.

While writing fiction, I’ve always made my main characters out to be prime examples of morality; and the bad people to be really bad, without cursing. They can murder, pillage and plunder as long as they don’t curse. In other words, I have trouble making my characters real.

The same with acting. I don’t want a role where I have to cuss a lot. I would gladly play a mobster or a serial killer, but I don’t want to be a bad guy who cusses. While it’s only acceptable to be a murderer in a film if you don’t curse while you’re killing someone. That’s because, if you play a character who cusses, the actor must cuss. Easy to separate an actor from the role of murderer, but much harder to separate the actor from a character who swears.

With that in mind, I recently accepted a role as a lecherous, selfish, beer drinking old man who swears a lot. The theme is a good one, though. Something about the plight of caregivers who must take care of cantankerous parents. The director and writer of the script is someone I’ve worked with before. That being said, I’m sure I wasn’t his first choice for the role.

In order to preserve the semblance of niceness, I refused to say any of the “major” curse words. Regardless, my character was a real jerk, who possessed no redeeming quality. At first, it was difficult for me to deliver my lines in convincing manner. But, as time wore on, I got into character and it became less difficult.

And, speaking of beer, I’ve always hated the stuff. The smell was almost as bad as the taste. But, by the time scene 24 ended, I didn’t hate it anymore. I didn’t like it, but I managed to drink it without making a face. In total, I swallowed about a half can of lite beer. I got so tipsy.

My kid brother also had a part in the film. It was Al’s second role as a preacher. I’ve never visualized him as a preacher, but at least two casting directors have.

In his scene, Al was supposed to deliver a short fire-and-brimstone sermon. He was playing the stereotypical, hypocritical preacher who sermonized everyone straight to hell. Well, Al ended up writing his own sermon, and he changed it a bit. He stood in front of the congregation and talked about grace and love and seeking help from God. He even had tears in his eyes at one point.

One of the actors, sitting near me during the sermon, was supposed to appear angered at the preacher. However, after the scene, she told me that she started listening to Al and almost lost sight of the scene. The director even liked Al’s delivery. You see, my kid brother took the opportunity to change his character in a way that, I believe, improved the scene. Mom would’ve given him a big ol’ hug… and she would’ve spanked me.

I grew some as an actor as a result of playing such a jerk. And, I shed a little more of my naivete. Regardless, the filming is complete. All that’s left is the editing. The director hopes to enter “Palliate” at the South by Southwest Festival in Austin.

Realizing that you can make nearly anything sound justifiable, let me say that in scripture we read about some vile occurrences caused by both evil and godly people. God, being God, used honesty in the conveyance of His message. While my character was far removed from morality, he was crucial to the message of the film. That means something to me… but it would in no way keep Mom from giving me a spankin’. It was nearly impossible to justify bad behavior to Elsie.