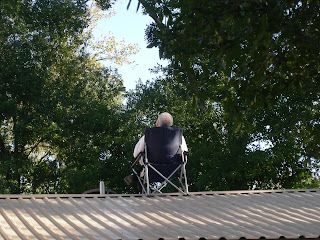 ROOFTOP – Did any of you notice how clean the siding of the house is? Well, by the time we’re through here, it’ll be too dark for you to see it, so climb down and take a look now. -- Yes, I’m joking. Sit back down. Don’t get me wrong, the siding looks great, but it’s not worth a double descent. Some of you haven’t fully recovered from your climb up here.

Okay, back to the siding. Monday, a guy who works for a pressure-washing company came out and sprayed the daylights out of this place. Used an Eco-friendly brown oily stuff. In fact, I think that was the name of it. With oily stuff, algae is supposed to stay off the siding for seven years. And, the spray won’t kill the grass, the flowers or harm the neighbor’s cats. Shoot.

I signed up for a $100 spray job, but ended up paying more for Eco-friendliness and window spraying and porch-post-mildew-killing and for telephone line sagging. It’s the ol’ bait and switch thing. For what the job ended up costing me, I could have purchased my own spray washer and had Kay do the job.

But, let’s forget that. I’m sorry you even brought it up. We’re up here tonight to ponder, not to gripe. Some of you may have to remind me of that a time or two, ‘cause I tend to wander when I ponder. – What?

What’s been monopolizing my brain of late is something quite aggravating. But, I’m not griping about it, you understand? It’s just the thought that if I could remember half of the stuff I know, I’d be the smartest person up here.

Every single day I pack in a bunch of information. I’ve seen dozens… billions of documentaries about space, nature, history, math, uh… stuff. But, I can’t remember a fraction of what I know. It’s up there, all right; I just don’t know the password to bring it down. It’s like a joke. I’ll it hear it one minute and forget it the next. Just chaps my chapables.

A couple of you may recall an article I wrote about a conversation I had with Kay’s brother, Mike, a couple of years back. Actually, it was more of a lecture than a conversation. Mike was pontificating about the universe. The guy has a Masters Degree in Physics and Math. And, he’s blind! He has to keep all of the equations and theorems in his mind, ‘cause he can’t see ‘em written out.  He’s the smartest guy I know. I could just slap him.

Anyway, Mike was sitting across the kitchen table from me talking about the possibilities of us having more than just five senses. Say, 18. And we’re living in a place with 30 different dimensions. I was making all kinds faces at Mike while he was explaining this to me, because he was talking way over my head. And, because he couldn’t see me doing it. By the way, he’s got a great sense of humor.

But, at one point I quit making faces and started listening. That’s when I had an epiphany. You know, something that, uh, hits you that, uh…? Well, I don’t know what it is, but I had one. I latched onto that thought for about two seconds. Then it was gone.

But, for a moment, I understood the mysteries of faith, hope, fear, life, and spirituality. All the important stuff. And, I wasn’t on drugs. I was taking medication for gout, but I don’t think it had anything to do with the vanishing epiphany. The pills don’t even have much to do with my gout.

Regardless, the brief realization that captured my mind is somewhere in my brain just waiting to be called to memory. The only way it’s going to resurface is when I’m falling off a cliff and seeing my life flash before my eyes. I have every confidence that’ll meet the ground just before the epiphany shows itself.

So, that’s why I’m up here cogitating. Just trying to get a grip on things. Not a gripe; a grip. But, I’m also up here so I can apologize to monarch butterflies everywhere. I don’t see any at the moment, but they’re probably listening. Some of you may remember an article where I insulted monarch butterflies for being too selective in what they eat? They only eat milkweed. I hinted that that was the reason they’re numbers are down.

Well, I saw one of those nature shows yesterday, and learned that milkweed contains a toxin that doesn’t hurt monarch caterpillars, but it makes them taste terrible to predators. Sickening, even. Lizards, birds and snakes won’t eat monarchs. Polar bears can take ‘em or leave ‘em.

What I considered to be a factor in the near-eradication of monarchs, is actually something that’s kept them alive for centuries. If mama monarchs laid their eggs on the leaves of just any plant, the caterpillars would taste better and geckos would eat ‘em up. Vile-looking creatures, you ask me.

So, I now apologize to monarch butterflies for insulting them, and I apologize to their Maker for questioning His reasons for milkweed. I still don’t understand the purpose of lovebugs, but their place in the food chain is likely responsible for the preservation of orcas. --  I’m pretty sure all of that was covered in my epiphany… not that it’s doing me any good.  -- Next time.